Badfish Roller Derby plays flat track roller derby according to the latest rules and clarifications from the Women’s Flat Track Derby Association. View the video below to get a basic idea of the game and see the official WFTDA rules listed after the video.

Introduction to Roller Derby by WFTDA

The latest full ruleset is downloadable at the WFTDA web site.

The objectives of roller derby are relatively simple.  Each team fields a single point scoring skater (“Jammer”) whose object is to lap as many opposing skaters as they can.

The remaining skaters who aren’t scoring points work both on offense and defense at the same time — to block the opposing Jammer and to clear a path for their own Jammer.

COMMON QUESTIONS ABOUT THE GAME

Much like in football, the ref squad internally divides areas of responsibility — the front of the pack, the rear of the pack, scoring for one team, scoring for the other team, etc.  The refs practice communicating with each other to determine the legality of action on the track.

Yes.  Ever since its invention in the 1930s, roller derby has traditionally been a ‘quad’ skate game.  Quad roller skates promote control and stability, and their smaller wheel base reduces the chances for skaters to get tripped up on each others’ skates.

Very rarely.  The WFTDA rules call for the expulsion of skaters participating in fights, which helps to keep the skaters and referees safe.  Fights did occasionally break out on the track in the Gotham Girls’ early seasons, but since then the flat track roller derby game has matured.  The skaters now channel their aggression by getting up, dusting themselves off, and legally hitting their foes even harder in the next jam.

Yes — for fifty years roller derby was played primarily on concave (“banked”) tracks.  These tracks were big and expensive and required reassembly as the derby skaters of the time barnstormed from town to town.

In 2001 and 2002, skaters in Austin, Texas, lacking (at the time) the budget for a banked track, created the first drafts of a modified ruleset to allow the same basic game to be played on a flat surface.  The popularity of this style of play has been exploding around the world, as the ‘play-anywhere’ nature of the flat game has allowed skaters to learn the game without investing in a banked track infrastructure.

A handful of leages in America play primarily on banked tracks (most notably in Los Angeles, Austin, and San Diego), while hundreds of leagues play the “flat track” game.  Many skaters and a small number of leagues train for both styles of play. 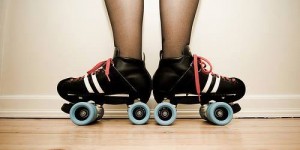 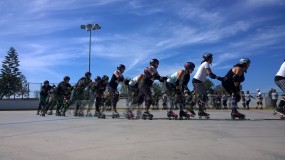 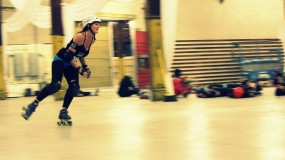 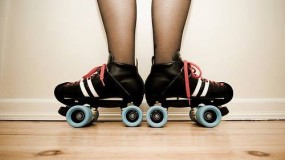